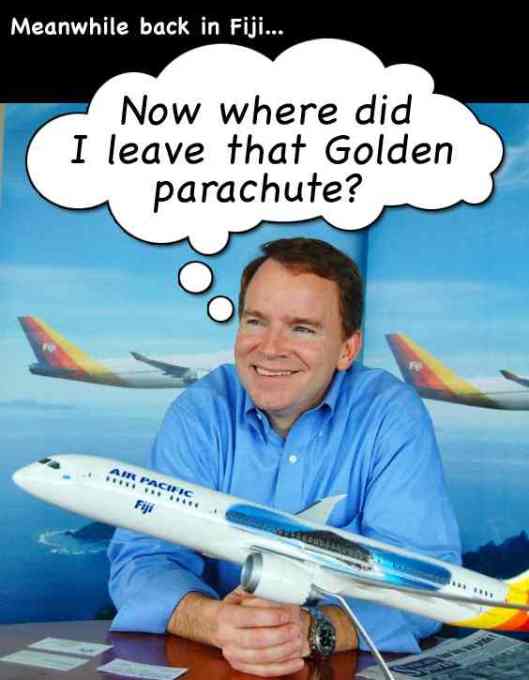 When is Frank going to realise that Fast Talking High Flying Dave is managing the airline into destruction. Promises do not make profits, if things continue this way we can wave the pensioners $400,000,000 Four Hundred MILLION loan goodbye.

Prime Minster, wake up and smell the Jet Fuel, stop listening to Dave’s slick sponsor the Multi Tasking Minister, get a professional organisation to assess the situation ( from China if you wish ) but do something before Air Pacific  follows Air Australia down the drain and Fast Talking High Flying Dave departs forever on an ID 100 ticket to live a life of luxury on ill gotten gains.. And there is no need for FTHF Dave to purchase Airbus A330 aircraft because there are 5 leased by Air Australia available for IMMEDIATE leasing!!

The pensioners challenge FTHF Dave to tell the shareholders ( the public and pensioners of FIJI ) how much has been spent in the past 6 months for Hotel accommodation, vouchers and chartered aircraft.

UPDATE: Sunday 19th Flight to BRISBANE CANCELLED, does no one in government realise how much damage is being done…?

Is there anyone in the Fiji Navy who will show this man the
Golden Rivet ?
Greybeard

1 thought on “FTHF Dave has Done It AGAIN”