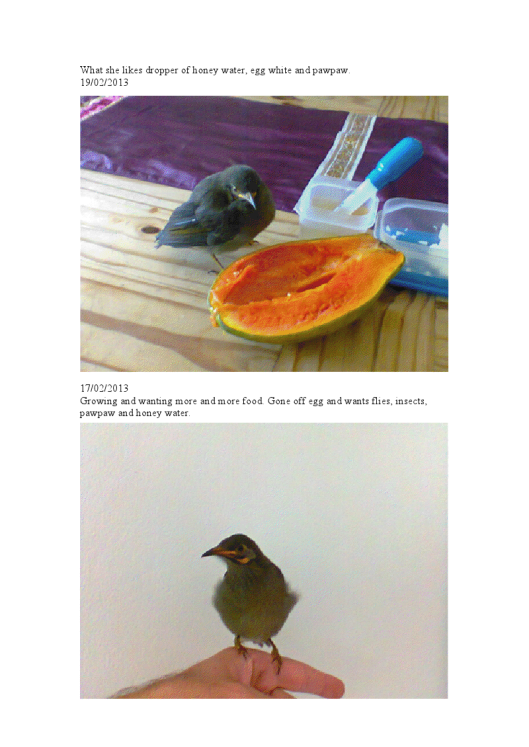 On Sunday February 3rd my son, walking to the nearby shops for that morning’s papers, found a little nestling lying in the road. It had just enough fluff and feathers to be identified as a baby wattled honey-eater. There were people nearby but they were showing no interest, so, knowing that a cat or a dog would likely kill it, Robert decided to try to raise it. At home he found a suitable plastic container, lined it with an old towel and, having made the bird a temporary home, he phoned me to ask my advice about feeding it.

Years ago in the UK I came to know a woman who rescued injured birds. Her house was full of them, including a ‘recovery’ aviary in the garden. Two of her patients were permanent lodgers – a one-eyed owl and a black-bird with half a wing missing, could not be returned to the wild, and lived quite happily together, loose in the house for the most part. The rest of her patients were housed in a variety of cages dotted about her home. These patients were all fed on scrambled egg and the occasional supplement of worms. This kind woman also ensured that her charges each had a mirror to look into – she claimed that seeing what they thought was another of their kind would give them comfort. So I suggested that Robert add a mirror to his make-shift nest.

By Sunday evening the bird was taking scrambled egg from a pair of plastic tweezers – or rather, Robert was shoving the egg down its throat in imitation of an adult bird; and Robert had made up some sugary water in the hope that it would take it from a dropper. Come Monday the bird was still alive.

Robert had an appointment in Suva late that morning. Before he left for town he Googled rearing nestlings and returning them to the wild; he also contacted Kula Bird Park, who told him that hard-boiling the egg and finely chopping it might make feeding easier, and to make up honey-water rather than give the bird sugar. Shortly before he left for Suva he brought the bird around to our house.

I’d become a bird-sitter, and it was both exhausting and terrifying. No way did I want this bird to die on my watch! None too well at the time, I was run ragged by this minute, rather ugly, almost featherless wee creature. It lay on the towel in the basket chirping constantly – loudly when it wanted to be fed; quietly and contentedly for a while afterwards – a very short while afterwards. I’d told Robert that if I were to be a bird-sitter I had the right to name the bird – so I named it ‘Beaks’ since we had no idea what gender it was. Beaks was with me for only three hours that day – it felt like three weeks.

A couple of days later I provided a larger basket and Robert set to converting a bedside table set of drawers into a cage. First he removed all but the shallow top drawer: that would remain for the storage of tweezers, dropper, tissues, and newspaper for the bottom of the cage. In the back left corner, raised from the floor, he built a 4 inch square platform with a lip, and into this placed a real bird’s nest that I had found years back. He made holes in the sides of the box, and inserted several lengths of doweling for the bird to eventually perch upon. He cut a length of mosquito netting the width of the box, stapled it to the wood beneath the drawer and stapled the bottom of the netting to a piece of doweling cut to fit the width – this could be rolled up and the doweling held neatly in place at feeding time. Lastly, the mirror was firmly attached to the left-hand wall, where Beaks would be able to see itself.

Beaks had been soiling the towel, but as soon as it was placed onto its real nest and fed, it raised its little bald bum and ejected a tiny self-contained bag of poo out over the edge and onto the floor! We were all amazed at that as none of us knew that a baby bird would do that. It had not been taught – it was, we decided, pure instinct.

Day after day Beaks grew a little bigger. After eating it would preen the outer quills off its growing flight feathers to free them. Gradually tiny feathers replaced the fluff on its chest. Within a week it would sit on your finger to be fed: and it quickly learned to insert its very long tongue into the end of the dropper to sip its honey-water.

Two weeks after being rescued, Beaks began to develop a personality. It decided that it didn’t like egg yolk, actually turning its head away when offered it, and by the end of the week it wouldn’t take the white either. Robert decided to try feeding it dead flies. We thought up several ways to attract and catch them – all of them quite disgusting; eventually he adapted a plastic water-bottle with an inch of honey-water in it. This attracted a lot of flies, but it was difficult to get the lid off the bottle and keep the netting closed at the same time, so many flies escaped. Attracting them onto a plastic bag smeared with food was a great way to kill them, but who can spend hours sitting on the kitchen doorstep swatting flies. The answer to this was a ‘double bottle’ invention which is beyond me to describe.

By the end of the third week Beaks had a full set of feathers, even if its tail feathers were still very short. It had also taken to flying out of its cage onto Robert’s head and shoulders – it was time to let it fly. Robert would close the mosquito screens and set Beaks free, and as he moved from room to room, Beaks would follow and perch on his shoulder.

Then we realised something disturbing. When, at the start and end of each day, the wattled honey-eaters were making a racket outside in the courtyard and the hedges, Beaks took absolutely no notice whatsoever. Simply continued its now very loud indeed, chirrup, chirrup, chirrup for food and gentler shurp, shurp, shurp when content. Beaks thinks it’s human!

This was a huge disappointment: we realised that a hurt bird looking into a mirror at least recognises that it is looking at another bird – but Beaks does not. Despite the mirror it recognises only Robert as its parent; and will happily go to other humans – indeed, it even flies onto Kora the dog’s back. And Kora has taken to giving it gentle licks! Beaks has been placed out of doors – it has been for walks in the garden on Robert’s shoulder. On one occasion when it was outside in its closed cage, a minah brought it a new-born gecko. On another, six minahs were caught advancing steadily upon it, with obvious evil intent.

We have no idea if Beaks will ever return to the wild. It is mostly silent when Robert is not near, but as soon as he, or any person, or Kora comes into view, the chirping starts, and it clings to the mosquito screen wanting to be let out. Its tail is now almost adult length. A new, much larger cage is being made, while it flies freely about the house, leaving little messages everywhere – the tiny poop-bags lasted exactly until the day of Beaks’ first flight and the removal of the nest which had become too small. Besides, it is now happy to perch and no longer needs the comfort of a nest.

Beaks is now learning to catch living flies that have been caught in the trap and then released inside the cage, happily tucking into fifteen or twenty flies at a sitting. It eats those small black muddies we all love to hate, and enjoys the odd rose beetle, too. When it is given something it considers too awkward to eat it instinctively bangs it against the floor or a perch until it is broken, or soft enough to swallow.

Robert has very mixed emotions about Beaks – well, we all do. We are happy it was rescued, and happy that it survived, and that it is eating and sleeping and flying – and is cared for. We have been privileged to be a part of rearing this bird. But we all agreed with Robert that Beaks should go free one day; and we are not at all certain that that will be possible. If anybody reading this knows how a rescued and hand-reared nestling can be safely returned to the wild, please let us know by leaving a comment.