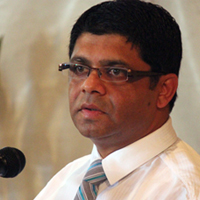 As work begins on analyzing the public submissions on the draft constitution, Attorney General Aiyaz Sayed-Khaiyum said they understand that some members of the public want further elaborations to certain sections.

Sayed-Khaiyum said for example, although itaukei land is protected with all other types of property and culture in the Bill of Rights, some people have said that they want a specific section on itaukei land.

Sayed-Khaiyum said that he cannot say which specific amendments will be made because the Office is in the process of looking at all the submissions.

It is common knowledge that this man is running Fiji, HE makes the rules that we all have to live by, HE plays the tune that everyone has to dance to…EVERYONE.. EVERYONE … just think about it for a few minutes Frank

Who will approve submissions? HE WILL, so do not expect any amendments HE does not like..

1 thought on “What OFFICE, this mans office ?”