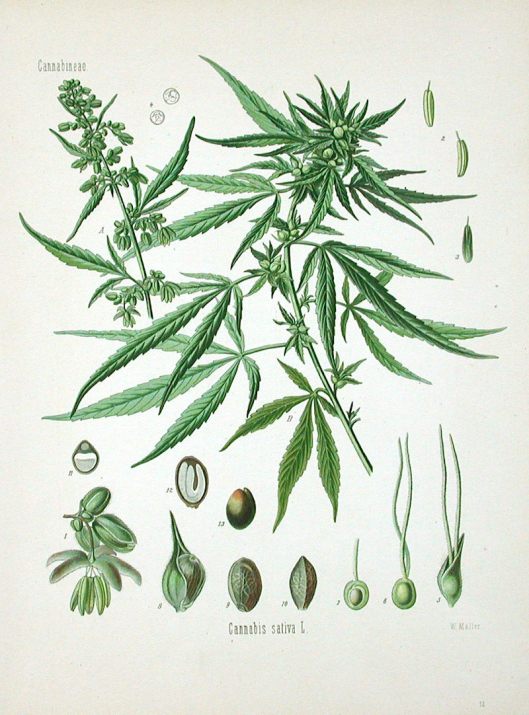 If I told you there was a plant available to us today that could be grown in pretty much any soil, requires no pesticides and it takes very little maintenance to grow, and this magical plant could be used for a very large number of necessities and goods we use today yet we don’t use it, would you think to yourself “Joe you must be high or on some other cheap drug?”

Well potential naysayers out there, I’m not high nor do I get high, but let me tell you, there is a plant available right now and it is often mistaken to be marijuana but has capabilities that are beyond what you could imagine. It’s called Hemp. Right off the top, Hemp looks very much like marijuana but unlike marijuana, it does not contain anywhere near the amount of THC needed for someone to get high if they tried to smoke it. Funny thing is, in the United States, Hemp is just as illegal to grow as Marijuana is. How can this be? The plant doesn’t even provide THC to get high and yet it’s still illegal? Yes…

Hemp used to be used for many things: clothes, cars, plastics, building materials, rope, paper, linens, food, medicine and so on. In fact, it used to be mandatory in the United States for farmers to grow hemp if they had the land. There are plenty more stats regarding hemp you can find here.

The fact is Hemp was very popular throughout the 1800’s and 1900’since it was incredibly useful for so many reasons. But one day that all changed, and now it is illegal.. so how did this happen?

The History
During Hoover’s presidency, Andrew Mellon became Hoover’s Secretary of the Treasury and Dupont’s primary investor. He appointed his future nephew-in-law, Harry J. Anslinger, to head the Federal Bureau of Narcotics and Dangerous Drugs.

Secret meetings were held by these financial tycoons. Hemp was declared dangerous and a threat to their billion dollar enterprises. For their dynasties to remain intact, hemp had to go. This then led these men to take an obscure Mexican slang word: ‘marihuana’ and push it into the consciousness of America to demonize hemp.

Not long after this plan was set in place, the media began a blitz of  ‘yellow journalism’ in the late 1920s and 1930s. Yellow journalism is essentially journalism where stories with catchy headlines are put into the mainstream media to get attention, yet these stories are not well researched or backed up. They are often used simply to create public opinion. Many newspapers were pumping stories emphasizing the horrors and dangers of marihuana. The “menace” of marihuana made headlines everywhere. Readers learned that it was responsible for everything from car accidents to losing morality and it wasn’t long before public opinion started to shape.

Next came several films like ‘Reefer Madness’ (1936), ‘Marihuana: Assassin of Youth’ (1935) and ‘Marihuana: The Devil’s Weed’ (1936) which were all propaganda films designed by these industrialists to create an enemy out of marihuana. Reefer Madness was possibly the most interesting of the films as it depicted a man going crazy from smoking marijuana and then murdering his family with an ax. With all of these films, the goal was to gain public support so that anti-marihuana laws could be passed without objection.

In the 1930s, things were different than today. The population did not question things very much. They did not have tools like the Internet to quickly spread information and learn about things that were happening. Most built their opinions and beliefs off of the news via print or the radio. As a result and what was instructed by mainstream news, many people did tell their children about marihuana and thus shaping a strong public opinion about it.

On April 14, 1937, the Prohibitive Marihuana Tax Law or the bill that outlawed hemp was directly brought to the House Ways and Means Committee. Simply put, this committee is the only one that could introduce a bill to the House floor without it being debated by other committees. At the time, the Chairman of the Ways and Means was Robert Doughton who was a Dupont supporter. With vested interest, he insured that the bill would pass Congress.

In an attempt to stop the bill from being passed, Dr. James Woodward, a physician and attorney, attempted to testify on behalf of the American Medical Association. He mentioned that the reason the AMA had not denounced the Marihuana Tax Law sooner was that the Association had just discovered that marihuana was hemp. Or at least a strain of it. Hemp and Marijuana are both varieties of Cannabis sativa, but this distinction was purposely not made well known to the public. Since the law was not so much focused on banning one or the other, both found their way into the ban. The AMA recognized cannabis/marihuana as a medicine found in numerous healing products sold and used for quite some time. The AMA like many other’s did not realize that the deadly menace they had been reading about in the media was in fact hemp.

In September of 1937, hemp prohibition began. Arguably the most useful plant known to man has become illegal to grow and use both in its non THC strain and THC strain called marihuana. To this day, this plant is still illegal to grow in the United States.

To the public, Congress banned hemp because it was said to be a violent and dangerous drug. In reality, Hemp does nothing more than act as an amazing resource to virtually any industry and any product. As you can imagine, this was also a big reason for the ban of Hemp as it was a serious threat to many of the big industries out there. At the time it was mainly plastics, oil and paper.

Here we are in modern day times and it is clear we are in some trouble when it comes to how we treat our environment. The resources and practices we use today for energy as well as product creation is very harmful and toxic to not just our planet but ourselves also. Despite the full awareness that exists surrounding hemp as an option to transform how things can be done on this planet, governments continue to have the plant banned and it is still often mistaken for marihuana due to how it looks.
December 5, 2012 by Joe Martino

3 thoughts on “How Hemp Became Illegal: The Marijuana Link”