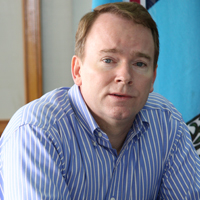 Outgoing Managing Director and CEO of Air Pacific Dave Pflieger said he cannot reveal the loan repayment agreement and details on the interest rates in relation to the loan taken from European banks to pay for the purchase of the three new A330s.

When asked in a conference, Pflieger said while many are raising issues about the loans, he said it is an amazing business plan to purchase the brand new planes to invest in the country.

The catalogue price for the new planes is US$200 million each and as revealed in 2011, the Fiji National Provident Fund gave Air Pacific a loan of $200 million which was the initial funding for the purchase of the three wide body planes.

85 percent of the loan to purchase the planes has come from offshore banks.

When asked on the repayment plan on the huge loan, Pflieger said Air Pacific which will soon be Fiji Airways is now doing well financially and he expects it to deliver profits to pay off the loans.

Air Pacific, in which the Fiji public have a 51% interest, and the Fiji Provident Fund Members have a huge investment has not produced an annual report with a full set of audited accounts for the public to view since Fast Talking High Flying Dave was appointed to run our Airline, so why would he divulge anything now.

Perhaps the Chairman of Air Pacific who is a qualified and reputable accountant, should be asked to explain.

The question is, how bad is it really and how long can the government of the day keep the truth hidden ?

1 thought on “Can the numbers Balance?”